When I first started searching for other guide agencies in the area, the pickings were slim. But not too long ago, I came across Northeast Mountain Guides, and after a quick review of their site, I had a feeling that they would supply us with exactly what we were looking for: A heart pounding endeavor with a super rewarding finish is exactly what we found.

After gathering 3 other gentlemen (which is a term I use VERY loosely) from NYC, we traveled to a grid coordinate provided by the guide agency. This is where we would park our cars and meet our guides. There's no cell service in the area, so if you weren't prepared, it's on you. (If you need to get prepared, take our intro to map reading course offered at BK2BC locations citywide... just sayin'...)

Once we met our guides, we got a nice run down of how the day would be going from Christy, and Joey, the lead guide, went to set our ropes. We hiked the short line down to the start point, and

we were ready to get started.

Everyone was waiting on the rock ledge at the top of the waterfall, with Joey, for the go-ahead from Christy down below. The thumbs up was issued, and we were ready to go.

At BK2BC we are firm believers in the old mantra of "Lead, Follow, or get out of the way". So when Joey asked who wanted to go first, I figured we, representing BK2BC should be the first to go. So I stepped out, with Chuck on my heels, and made the first descent of the waterfall. It wasn't pretty, but Chuck made up for it by not looking like a complete ass coming down.

Check out the awesome slow-mo video we got of Chuck sticking his landing on Instagram.

At the base of the waterfall is a very rewarding swimming hole. The chilly mountain water offered a nice reprieve from the 90 degree heat, and a nice cool bath for the scrapes and bruises we now had from our initial descent (at least for me).

Chris and Brant were patiently waiting for their turn down, Chris beaming with the excitement and fear of a toddler meeting Santa Claus, and Brant with the fear and clenched cheeks of a new guy in jail. In case you didn't know, Brant has a fear of heights, but he made the trip up to the Catskills, and there was no way he was backing out now.

Funny thing about being afraid is that, most times, if you're with a good group and there's some level of trust, you'll do just about anything, even if you're scared to death. If everyone was jumping off a bridge, would you go too? Yes, mom... depending on who was jumping.

Their turns quickly came up, and Chris made a solid first descent. Now it was time for Brant to truly face that fear. He shuffled to the edge, scooted on his bum, and dropped in to the descent. The initial drop was rough, not just for Brant, but for everyone. once you regained your bearings, planted your feet, and positioned your hands, the rest was cake... kinda. Brant made fast work of the descent. He was soon basking in the cool water, fear defeated.

Northeast Mountain Guiding provides you with a few hours of enjoying this fun, so after your first descent, you're more than welcome to hike back up, and do it again. And that is exactly what we did. we hiked up the steep game trail and clipped back in and did it again. Brant actually has a life, so after his first rappel, he was out. He traveled here, did his thing, conquered that fear, and was on his way home. There's nothing quite like that adrenaline rush accompanied with a dip in cold mountain water to start your Sunday.

After Brant left we kept running circles on the waterfall. Form was worked on, and rappels got better.

On Chris' last trip down, we grabbed the belay rope and tried to drown him in the waterfall. Don't worry... he survived. We're waiting on those pictures.

Any good adventure should always be capped off with an ice cold beer, especially on a hot, steamy, July, Sunday afternoon. We shared a beer with our new friends, and left with an awesome sense of accomplishment. We're already looking forward to our next outing.

If you want to join in on one of our adventures, contact bill@brooklyn2backcountry.com for information.

Special thanks to Northeast Mountain Guiding and Ultimate Outdoor Adventures for providing services for this trip. 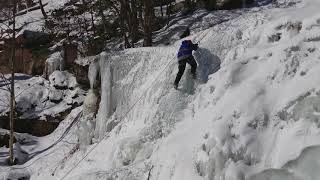 Ice Climbing in the Catskills - Continued

Ice Climbing in the Catskills 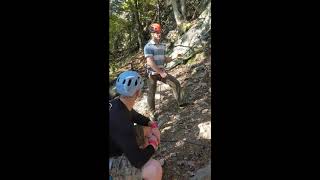 Winter Camping in the Green Mountains

Ice Climbing in the Catskills - Continued

Ice Climbing in the Catskills